I am very flattered to have been nominated for a Liebster Award this year by the wonderful obscura at Ancient Armitage.  Thanks, obscura!  My ego is feeling properly warm and fuzzy, just the way I like to close out a year.

The Liebster Award is a form of blogger-to-blogger recognition for blogs with fewer than 1000 followers.  Or 200.  Or 3000.  The specific rules seem to be different depending on where you look, but the point is that it’s a way for one blogger to show some love to another and hopefully drive a little traffic to some excellent blogs you may not have discovered yet.  As obscura is the one who nominated me, it seems sensible to go by her rules:

These are obscura’s questions to me, and my answers: END_OF_DOCUMENT_TOKEN_TO_BE_REPLACED

Sometimes the universe affirms you on a bar napkin. I’m not too high and mighty for it. 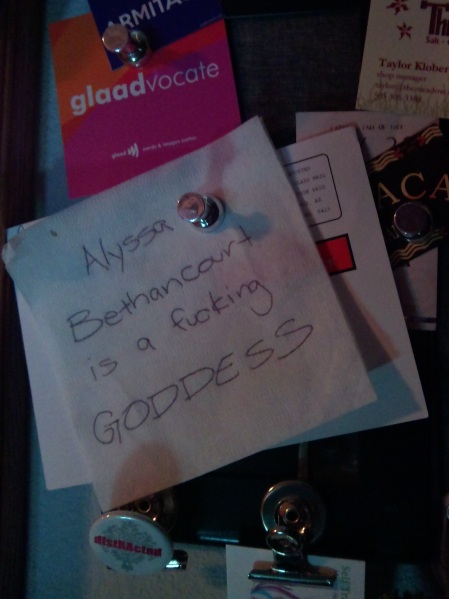 As the calendar closed out on November, I knew it would be possible to finish my novel by the end of the year now that my personal Novel-less Non-Writing Month (NoNoWriMo – I think it has a certain ring to it) had passed.  I knew the finish line was in sight, and had been making slow but steady progress toward it since my breakthrough in September.

What I needed, I determined, was to force myself to write in sprints, and that was exactly what I did.  Madly.  Barring necessary days off for the various Christmas concerts I had to perform, I wrote pretty much continuously from the 3rd to the 15th with very little time allotted for non-essential things like food and sleep (and definitely none for housework.)  It got even harder to take breaks for human necessities after I’d written the climactic scene and its immediate aftermath and knew that all I had left was to manage a bit of denouement.  When I woke up from a jittery three hours night’s sleep on December 16th, it was with the knowledge that I had only one scene more to write, and I would have a completed manuscript.

I’ve talked before about the fact that it was The Hobbit in particular of all books that first got me interested in the idea of being a writer and inspired my love of the fantasy genre.  So it was beyond appropriate that I got to celebrate finishing my novel by attending the opening night screening of the final instalment of Peter Jackson’s The Hobbit films.

My state going into the film was, I would have to say, euphoric.  Maybe a little swimmy, a little disconnected.  I hadn’t really eaten or slept the way a person sort of needs to for at least the previous week, and I was stumbling suddenly under the weightlessness of a six-year burden removed.  I lead with all of this because perhaps it contextualizes my response to the film in some meaningful way.  My state coming out of the film was something else entirely.

I’m going to try to get at why that was.  My thoughts are helped along by the fact that I have now been able to see the movie a second time, on the proper amount of sleep and sustenance and having had some time to come down from the I-just-finished-my-freaking-novel-after-six-years high.

My very spoilery thoughts about The Hobbit: The Battle of Five Armies, such as they are, beneath the cut.

END_OF_DOCUMENT_TOKEN_TO_BE_REPLACED 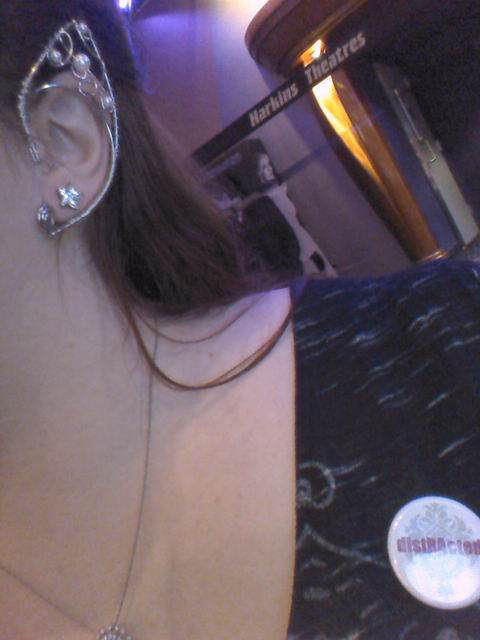