Thank you, internet. You truly do know everything.

There is a question I’ve been unable to determine the answer to for three months now. I was given this absolutely gorgeous picture frame that I love, but I have no idea what the Tengwar symbols say.  I may be a Tolkien geek, but I never got around to learning my elvish languages.  The shame. I know only enough to know it’s not a simple matter of converting the symbols to English alphabet equivalents because they represent sounds rather than letters, and the position they have in relation to each other can change the inferred sound.

Can anyone read this?  It’s just that knowing the humor of the particular friend who gave it to me, it might well say something like “bitch” and she might be having me on when she says she doesn’t know what it means, and I probably ought to know before displaying it on my wall. 😉 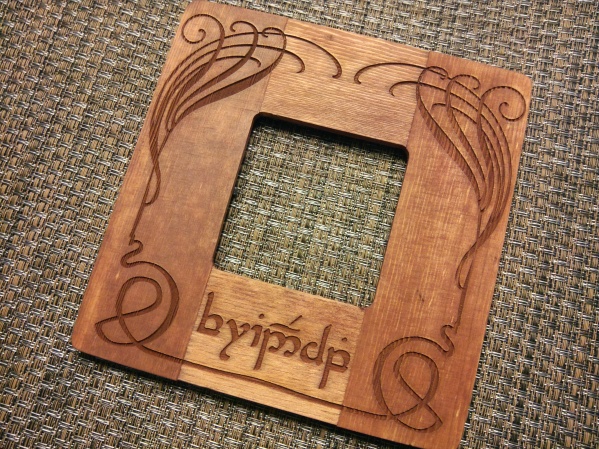 I’ve been having some (who am I kidding — ridiculous amounts of) trouble writing the final few chapters of this novel. At first, it was easy to blame summer and the pattern I have of never getting any meaningful writing accomplished, say, post-May until at-least-September-but-more-likely-October. But that was last summer.

That’s right. Basically zip in an entire year. And not for lack of trying. Really.

I know the advice: write anyway, no matter how hard it is, even if it’s garbage, every day. Bring yourself to the work if you expect the work to materialize. Believe me, I’ve given that a go. It hasn’t just been a year of browsing Tumblr for amusing puppy gifs and twiddling my thumbs. I’ve written and half-written and deleted the next scene so many times I’ve lost count, then given up and tried to break through whatever this is by writing something else instead. No dice of any kind. (I mean, yes, success at writing other things. But that has not, alas, transitioned into a successful push through the tough spot in the novel.)

And now I’ve just spent another evening hacking away at nothing I want to keep. Nothing that leads the story forward. As I was saving the paltry five words of alteration I made today in anticipation of closing the document, asking myself for the billionth time why it’s turning out to be so hard to just freaking write down what happens next, I realized it’s because I can’t see it to describe it and I’ve been trying to make the scene instead (the results of that all too apparent). Which in turn made me realize something else painfully obvious that I’m embarrassed to say I didn’t realize a long time ago: I’m apparently one of those writers. I can’t feel like I’m crafting. I have to feel like I’m describing things that I actually watched happen.

What to do when the scene won’t play, and all attempts to build it (like an actual damn storyteller and not a lazy special snowflake artist) meet with internal resistance because my subconscious thinks that’s not its job? That would appear to be the question.

One thing I will admit Arizona does right? Sunsets. Especially during monsoon season, when you step outside and this is the eastern horizon: 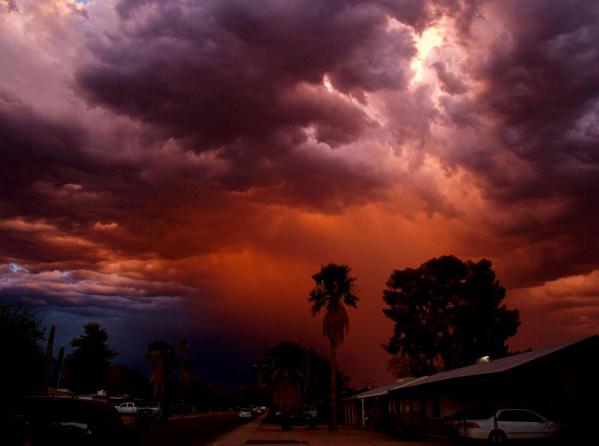 The spawn asked me if it was raining sunshine.

And also maybe don’t judge yourself so harshly on what you might glimpse back there if you do peek. You were in a different place then, and will be in another place yet tomorrow.